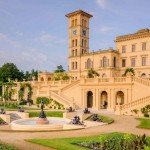 From this Autumn onwards, visitors to the Isle of Wight will be able to follow a new ‘Victoria’s Island’ Trail, and explore the monarch’s home – Osborne – where many of the events depicted in the new movie ‘Victoria & Abdul’ were filmed. Osborne on the Isle of Wight, the seaside residence of Queen Victoria, was one of the key locations used in the filming of the movie, due to be released September 2017, directed by Stephen Frears and starring Dame Judi Dench and renowned Continue reading →
The Caledon
×